Time flies – a week has now passed since the last Birdsong: Stories from Pripyat show at the Peel Hall, Salford University.

Saying I thoroughly enjoyed the experience of being involved in this project is certainly an understatement, but for the lack of a better phrase I will start here nonetheless. I find it truly fascinating how a single idea can grow and materialize into something so meaningful and relevant to so many. To have been part of this process is a genuine privilege.

A collaborative project by visual artist Clara Casian and composer Robin Richards Birdsong takes the form of an original documentary film with a new live score. It looks at the ghost city of Pripyat, which was built to serve the Chernobyl Nuclear Power Plant and has remained deserted since the catastrophic disaster in 1986. It juxtaposes footage of the abandoned city, along with its amusement park which was due to open shortly, and unique archival material.

Scored for a chamber ensemble of string quartet, bass guitar, piano and synthesizers the soundtrack does not simply accompany the film, but plays a significant role in communicating as well as transforming its meaning.

Combining the immediacy and energy of live musical performance with the visual impact of film, this project aims to revisit a dramatic and devastating historical event using personal and scientific narratives to draw out the tensions and truths at play in our collective, cultural memories of this unfathomable event. 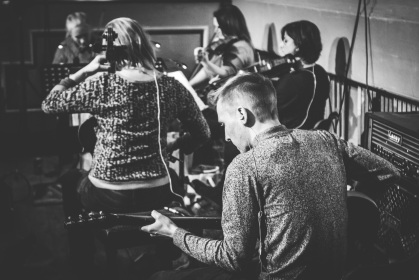 The premier sold-out performance at the HOME theatre, Manchester was part of the Artist Film Weekender. It was followed by a show at the most spectacular Stockport Plaza (in photos), concluding the three-show tour at Peel Hall. Undoubtedly, each of the occasions was special in its own way, but working together with such fantastic musicians and creative minds throughout this journey was absolutely fantastic! Moreover, bringing this unique and inspiring project to life was a privilege, so a sincere thank you to each and every audience member for being there and allowing us to share the story with you – it was, and always is, an honour. 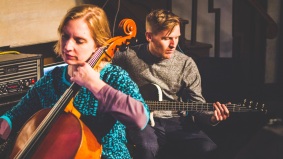 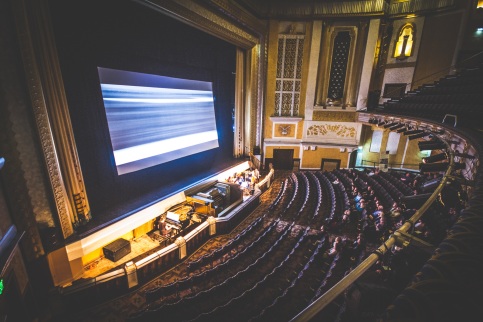 You can read more about Birdsong: on the official website , here or here
Photo credit: Ben Harrison Photography